At the March 11, 2021, Zoom gathering of the Alliance for Literary Writers, Authors & Yabbering Scribes (ALWAYS), our established authors shared a roundtable discussion about creating compelling book covers. I want to share with you some highlights from our discussion.

If you have ideas or resources to share, please include them in the comments below.

So, with all of that said, a short and punchy blurb works best. Hook the reader with compelling highlights without telling them everything that happens in the story. What you need instead of a short synopsis with too much detail, is a quick hook to entice a reader to want to know more about the story… an enticing marketing blurb.

And now my secret for writing the best blurbs ever…
Deborah Chester’s/Jim Butcher’s STORY QUESTION:

WHEN SOMETHING HAPPENS*, *YOUR PROTAGONIST* *PURSUES A GOAL*. But will he succeed when *ANTAGONIST PROVIDES OPPOSITION*?

This is a two-sentence description which can serve as the perfect foundation for your book blurb. Of course, you’ll probably want to embellish with some details within and around the story question, but it will start you off in fine shape.

Maybe using color coding for some of the phrases, below, will help you see how this works?

When something happens, your protagonist pursues a goal. But, will they succeed when the antagonist provides opposition?

The story question gives you the main points in your book:

When he finds out he’s a wizard, Harry Potter moves to Hogwarts School of Witchcraft and Wizardry to learn about magic and his mysterious past. But, will he succeed when the dark Lord Voldemort, who killed Harry’s parents, returns to retrieve an immortality stone so he can destroy the young student?

Growing up in a cloud of fear and self-doubt, Susan goes on a spiritual quest to find herself. Floundering to develop self-worth while unemployed and in the midst of a divorce with her unfaithful husband, will she be able to use her mind and will to overcome the hardships and forge a path to joy and fulfillment? Or will spirit intervene?

While reviewing a blog I ran across at the Self-Publishing School site, I realized their points covered some of the main techniques I teach in my writing workshops to overcome these issues. Study the few tips below, and you’ll be amazed at how your words jump off the page! 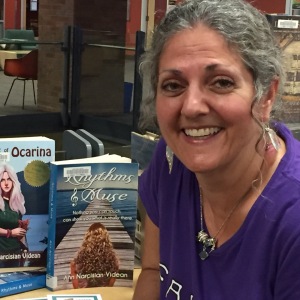 Ann with her books at the Tempe Public Library

You may benefit from these writing events…

Meet in-person with the ALWAYS writers’ tribe of established authors to discuss writing and support one another. In March, we’re talking about the structure of the ALWAYS group and how to better interact with and support one another. I hope you can join us! (We meet the second Thursday of each month in Gilbert, except for the first Thursday of each quarter when we meet in Phoenix.)
Romeo’s Euro Cafe, downtown Gilbert, AZ
11:30 a.m., Thurs., March 14, 2019

My Words Jump Off The Page!
[A presentation at the Society of Southwestern Authors—Valley of the Sun Chapter.]

Authors, learn a handful of writing and editing techniques to help you discover ways to build visual imagery and emotion, and subconsciously compel readers into your story. I’ll share my thirty years of marketing experience to show you how to make your story “jump off the page” for readers and publishers. In this two-hour hands-on session, explore:

Okay, it has no sticker, but it is a mule!  You’ll find Sticker Mule and much more info at the link provided.

Authors—or anyone marketing—are you looking for an awesome place to buy affordable printed “merch” for your books or products? You know… marketing merchandise, like stickers, buttons, labels, magnets, packaging, and such? Maybe something imprinted with the cover of your book?

Sticker Mule is your answer.

One of my author friends, Haley Rose, uses them with relish to raise awareness for her darling, educational children’s picture books.

Direct from Sticker Mule’s website, here’s what they’re about: “We relentlessly focus on making it fast and easy to order custom products. Order in seconds and get your products in days. Free proofs, free artwork help, free shipping, and fast turnaround are why people love us.” 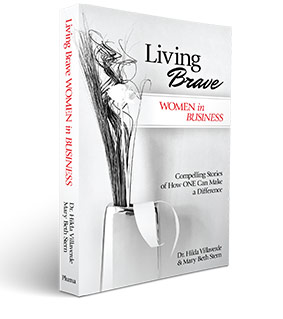 Book 3 in the Living Brave series debuts later this month at the “Voices of Success” conference.

You know how hearing just one comment, or reading a certain book can alter your life journey? Well, there’s such a moment coming up for you…

I had the honor to edit and produce the latest book in the Living Brave series by Dr. Hilda Villaverde and Mary Beth Stern: Living Brave… Women in Business: Compelling Stories of How ONE Can Make a Difference. It is filled with life-altering input from nearly fifty Arizona women thriving in business.

The book will be released in just a couple of weeks, but if you want to hear some of these women’s stories first-hand, you really should consider attending the authors’ “Voices of Success” conference, offering a day of inspiration. I highly recommend you invest in your future with this day-long session where you’ll learn how women just like you succeeded in business by using their skills, backgrounds, and sheer will to overcome whatever stood in their way.

You will find all the details here, including how to register.

Magical New Zealand forms the backdrop for my Delfaerune Rhapsody series. The land of the Maori. Are you thinking, “Maori? Wha—?” They are the native people of those majestic and diverse islands in the southwest Pacific Ocean.

One way the Maori have become better known in our current culture is through the All Blacks’s “Ka Mate,” which they perform as a group before each rugby match. This “haka“—traditional Maori war cry, war dance, or challenge—incorporates bulging eyes, long tongues, threatening stances, and shouts. Intimidating, right?

That’s why I pull elements from the haka to liven up my battle scenes, especially by my burned-out-rock-star-esque Dark Fae. 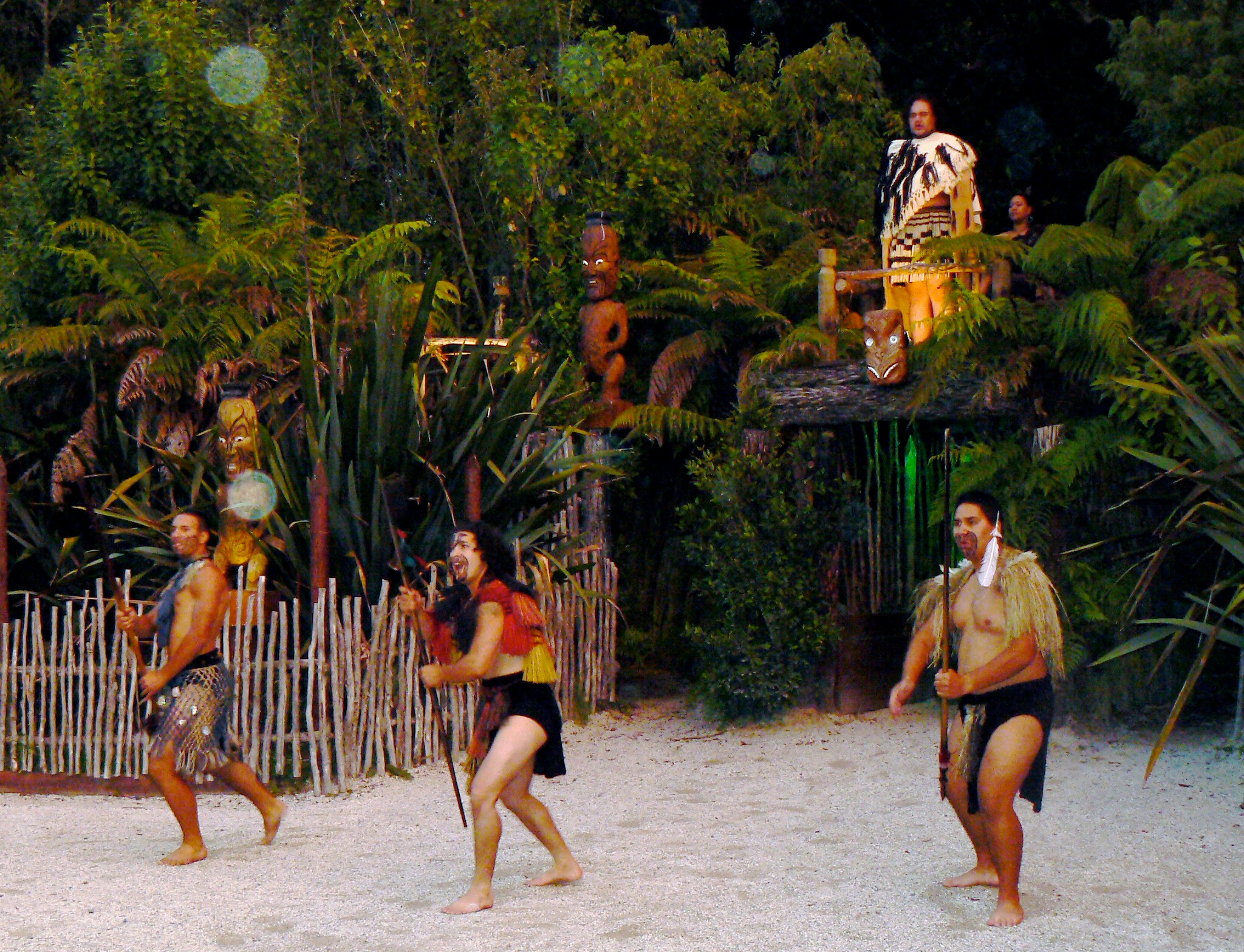 Also, many of the words I use in the stories come from the native people’s language. To represent “bad magic,” I use the Maori term “mākutu.” Another is “karakia.” It doesn’t translate exactly to “good magic,” but you can see how my use of it captures the spirit when you visit the official online Maori Dictionary.

Yes, that is a thing, and, if you click on the links I provide, you can read the Maori definitions and hear the pronunciations, too.

If you want a real trip, look at all the words that come up under “spell.” Don’t be surprised if you find a few more of these terms in my future writings.

What other words/translations do you know for “spell or “magic?” Please share!

The party tree—where Bilbo celebrated his eleventieth birthday—on the Alexander Farm film set in New Zealand. Is the tree described better by Tolkien, or more poignant in the screenplay/on screen in the Lord of the Rings movies? Come share your opinion. And, bring your own favorite adaptions to discuss. Hobbiton photo: ©2008 ANVidean.

Lord of the Rings: Tolkein vs. Jackson, which do you prefer?
Twilight saga: Book series or film adaptations?
Bridges of Madison County: Read or watch?

For something a bit different to discuss at our June meeting, let’s compare the writing and stories in book(s) versus movie(s).
Should there even be a debate? Join us for the roundtable discussion in our June 2018 gathering in Gilbert, AZ.

Cost:
A writing tip, and your own lunch.

RSVP:
PLEASE show the consideration of reserving your spot at the table by:
• RSVPing through the “Going” link on our Facebook Event page
or
• Contacting Ann Videan, ann@annvidean.com

If so, our tribe – the Alliance for Literary Writers, Authors & Yabbering Scribes (ALWAYS) – is the place for you. We’re an informal group of established writers looking for camaraderie, ideas, enlightenment and connection with writers, especially in the Phoenix metro area, to talk about our craft and businesses.

Any established writer can connect with us online through our ALWAYS Facebook page, get listed in our directory of writers on our ALWAYS LinkedIn page, or you can meet with us in person at a lunch meeting. We’d love to have any experienced writer join us at our next meeting … anyone who spends a significant part of his/her week writing, and wants to rub elbows with other writers.

In this excerpt from my upcoming book, Beat of the Pakiri, my protagonist Lark has just returned home from a near disaster, while out practicing her new unauthorized spell. As she faces the wrath of the realm’s leadership, you’ll find out why even the powerful teenaged protagonist fears this intimidating Fae leader.

You’ll also meet one of the little winged faeries… who has earned a king of a name.

The Acting Magistra of Karakia—among the most powerful spell casters in the realm—wasn’t someone Lark ever wanted to cross, let alone annoy. Summer Windish stalked forward, her elegant frame stiff, hazel eyes blazing, with energy wafting off of her like a sirocco wind. With her brunette hair lifting in billowy waves around her head, she engendered the dark queen Galadriel’s visage as she rejected the offer of The One Ring.

The human movie image playing through Lark’s mind cut off abruptly when the acting magistra stopped inside her comfort zone and leaned in.

“Lady Lark, what in the realm do you think you are doing? Throwing new spells around without appropriate clearance or support. As if we don’t have enough elemental upheaval already! And, doing it in the lap of our enemies and kidnappers of your parents, our leaders. What were you thinking?”

Lark drew back, grasping for the confidence to deal with her situation. She remembered how her father handled conflict, even among the most powerful Fae in the realm, when he was the Magistrate of Karakia. The mental image of his fierce frown and piercing brown eyes buoyed her inner strength. Feigning a calm demeanor, she turned her father’s adopted stare on the acting magistra.

No matter what Summer Windish said, trying the unauthorized elemental spell was the right thing to do. And, it had almost worked. If the blasted Stones family hadn’t shown up to interrupt her, she and The Earth Mother might have actually helped to partially reverse Delfaerune’s elemental devastation.

She tightened her lips and continued to stare levelly at the acting magistra, who clearly waited for a response. Allowing the silence to stretch, Lark took the moment to compose the emotion vibrating through her body. How better to diffuse a heated accusation than to change the topic?

“How do you even know what happened? I’ve just returned.”

“You can’t possibly know of the machinations the Division has in place to keep the realm, not to mention you, safe, M’Lady. Do you think we’d just allow you to go running around the realm alone and unguarded?”

Lark’s gaze moved to her bodyguards, who stood among the security contingent in formation around River. She thought she’d been so smart to escape her Bulky Boys before dawn this morning. Guess not. When her gaze caught Leif Derrick’s, he hung his head. Next to him, Sonny Wattyr turned an alarming shade of red as a little winged faerie, sporting a bedazzled white cape, flew over their heads. The creature landed his little blue suede shoes on the guard’s broad shoulder and stared at Lark, his wide grin spreading between long sideburns.

What in the realm is the notorious “Elvish” doing here?

Let me know what you think, will you? 🙂